All PostsHome / All Posts / Saying Goodbye 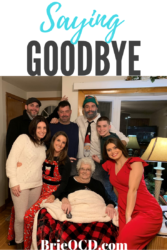 “It’s the emptiest and yet the fullest of all human messages: ‘Good-bye.’” ―Kurt Vonnegut

My grandmother is not doing well. Apparently there is nothing anyone can do and they are just trying to “make her comfortable” till the end.  I just spoke with her on the phone and I don’t know how to say goodbye and tell her all the things I want to tell her without acting like she is already gone.

I struggled with the same thing the last time I spoke with my uncle. He was battling cancer and when I spoke with him he didn’t have his death papers signed but I had a feeling that it might be the last time I spoke with him. I wanted to tell him so many things. I wanted to tell him that he was the best uncle growing up. That he always looked out for me and made me laugh (and scared sometimes – Gaulin’s have a way of reacting instead of responding all through gritted teeth, then 2 minutes later we are all soft and trying to backtrack LOL). That he never made me feel out of place at the dinner table when I didn’t want to eat whatever everyone was eating (I was extremely picky). That his “dance moves” are still burned into my memory. I wanted to tell him that he was a such a loving and supportive uncle, father and husband. That he was loyal to a fault and that everyone knew and appreciated all of the sacrifices he made for his family. But I couldn’t. Instead, I just told him that I loved him and hoped that he heard all of the things I couldn’t say.

So when my grandma called me today (by way of my sister) to tell me that she was “feeling better”, once again, I wanted to spill all of my thoughts but I couldn’t. How do I tell someone who is still living and fighting that I think this might be my last chance to tell them how much I appreciate and love them?

How do I tell them thank you for teaching me the value of a dollar. Thank you for teaching me to be frugal some places so that you can spend it others. Hell, to pick the mold off the bread and just eat what’s left so that you have some money to travel to China, Alaska, or anywhere in the world. Thank you, for tricking me into eating that Lender’s onion bagel that day because it made me realize that there were so many other things I said I didn’t like that I probably did! Thank you for crushing up my pills in orange juice so that I could swallow them without gagging and crying. Thank you for being a workhorse and showing us that we don’t need to rely on anyone but ourselves. Thank you for being a tough but loving grandma who taught me how to be a strong independent woman but one who could also dote on their husband/family after a long day at work.

It’s impossible. I couldn’t do it. Instead I said, “you know that I love you, right gram?” 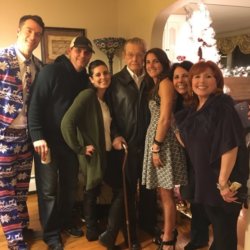 Less than  a year ago I got the call while I was en route to Australia that Red, my late grandma’s boyfriend was in hospice. Now Red wasn’t technically my grandfather by blood but he had been in my life and a grandfather figure since I was about 7 years old.  It hit me like a ton of bricks. I had spoken to him a couple weeks before and told him I loved him before hanging up but did I say it enough? Did he truly hear me? I called him from one of our layovers in Australia but he was sleeping so the nurses wouldn’t let me speak to him. I cried in the airport. I tried again later that night and made them put the cell phone to his ear. I yelled through tears, I LOVE YOU! I LOVE YOU RED! He couldn’t speak back but I hope and prayed that he knew how much he meant to me. How much it meant to me that he cared for my grandmother all those years. How much his comic relief brightened my day. How his love for Jerry Springer and other white trash television warmed my heart. I hope he heard me. I hope he knew.

This past year has been rough with multiple close family members passing. It’s been tough and even more so because I am on the West Coast. I am not there to say goodbye and look into their eyes and tell them how much they meant to me. I know deep down that they know, but it still doesn’t make it any easier. So as I write this, I sob and I hope that I have done enough over the years to let the people who mean the most to me know that I love them and I wouldn’t be the woman I am today without their love and guidance.