All PostsHome / All Posts / Living In Sin: My Journey with God 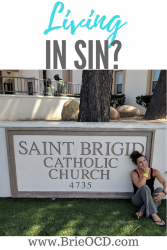 I grew up Catholic. Baptized, first communion, confirmation the whole nine. I went to Catholic school starting in 7th grade all the way through College, however, we were never really big churchgoers. We would go for a couple weeks and then stop, go, stop, go, stop. I was just never really into it. I mean, lets be honest, as a child and teenager, Church was BORING. I would zone out and all I could think about was when it was going to be over.

GOD IS ALL KNOWING

I mean God knows that doesn’t he? Wouldn’t it be better if I didn’t go at all, instead of going and thinking about when I was going to get the heck out of there?? I didn’t feel like going to church necessarily made me any better of a Catholic or human in general.

I believe in God. I pray to him (mostly when I need something, but also when good things happen). My relationship with God has always been talking to him on my time. I have tried for years to go to Church but other options kept me away (Sunday Funday anyone??). Instead of going to church, I chose to focus on just being a good person or Christian if you will. Taking those teachings that I learned and applying them to real life. Do unto others as you want undone to you. Honor thy father and mother. Thou shalt not kill.

A lot of teachings have been ingrained in me by the Catholic Church, however there are a lot of teachings that I didn’t necessarily agree with and the dose of guilt that came along with it. Constantly feeling like I was “living in sin” because I lived with my boyfriend before marriage. Because I used birth control (which btw I started using for other reasons than sex), because I didn’t get married in the Catholic Church. The Church leads you to believe if you do these things you are going to Hell.  I mean how can that be? If God is all loving and we act as good human beings then how could we possibly go to hell just because we lived with our boyfriend before we were married?! It just doesn’t make sense.

So all of these years I have basically made up my own version of Catholicism. One that justified my actions. God was always at the crux of it but I played by my own rules.

SOMETHING BIGGER THAN MYSELF

All of that time though, I had been searching for something else. Something deeper.  Something I could sink my teeth into and believe in. Living in San Diego, there hasn’t been anyone to make me go to church, so I didn’t. Sure, I have dabbled here and there over the years but never really found that spark to continue going. I mean, I am not a teen anymore but I still think Mass is boring. My mind is elsewhere. So what is the point of going if I am not going to pay attention and take it all in? Again, another justification to make me feel better and assuage the guilt.

Flash Forward to 2018 and Catholicism and the Church have been on my mind. I have talked  about possibly going back to test the waters. Or maybe even find a different denomination where Church is more interactive and fun (Gospel church anyone? Can I get an Amen!! Hallelujah!!). Up until a couple weeks ago, that was as far as I got. A thought. That was until some of our best friends asked my husband and I to be Godparents!!

My first thoughts were…. Really? Us? Whohoo!! My next thoughts were, crap we didn’t get married in the Catholic church (much to my mothers chagrin) and we haven’t been going to church. Can we even be godparents??

Enter St. Brigid’s Catholic Church. We went to church and I was BORED. I am now in my mid 30’s and yet I still couldn’t focus. The only saving grace is that we saw some friends there and after the mass they served scones! I had never seen a church with food and drink after the service. Ok maybe I could get used to this.  We went and met with the woman in charge of new member registration and I have to say she was awesome. So down to earth and just overall relatable. I was beginning to realize that St Brigid’s was a place that welcomed you with open arms and a smile. One that didn’t guilt you and make you feel like a terrible Catholic because you hadn’t been to church (or get married in one). I was starting to like this place.

Next order of business. Godparent’s Orientation. Surprisingly fun! They served beer and wine and catered Mexican food. Wow, I thought, this place really knows the way to a girls heart. However, even though the food/beer were tasty, the best part was the Deacon running the orientation. He was so down to earth and his story of how he came into Catholicism, was relatable and inspirational.

All of the people I have met thus far at St. Brigids have been normal, down to earth humans that have all made mistakes (and have even been distracted in church!).  They are all just regular people who are just trying to be better versions of themselves every day. They were non-judgy and made me feel like I was a long lost friend.

So, that is where I am currently at. Trying to be a better human and believe wholeheartedly in something greater than myself. To surround myself with people who truly care about the well-being of the ones around them. To continue to be a good person and hopefully deepen my relationship with God. I know that I will not always be the model Catholic. But I am hoping that this little run I am on right now will stick around for awhile and maybe one of these Sundays something will click and I will have that AHA! moment.

Until  then, I will continue on my journey. Striving to be a good human being, helping others and hopefully bringing some joy to people’s lives.