All PostsHome / All Posts / My Unconventional Love Story 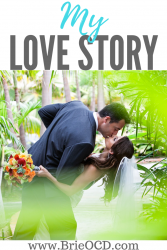 “When one door closes, another opens; but we often look so long and so regretfully upon the closed door that we do not see the one which has opened for us.” – Alexander Graham Bell

I did just that, for 6 full years. Ya see, I had the All-American BF in college. And looking back now I see all the ways we were incompatible, but at the time it didn’t seem that way. I graduated College in 2003, and immediately moved to San Diego. He still had one year left and possible tours to terrible places with the Army. We ended up breaking up but never had any real closure. For years we would meet up,  whenever I was on the East Coast, he and his family also visited me on the West. And so it went, that every time I would start getting over him, I would see him and be back at square one.

I was single for 6 years. I am not a dater. I never really like anyone romantically (I put everyone in the friend zone) and rather pay for my own meals and drinks then owing anyone anything. At the time I always said that I rather hang out with my group of friends (Hancy was part of that large group) that were fun, awesome and just great to be around, rather than torture myself on a date. 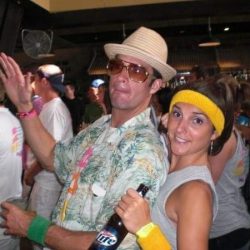 Flash Forward to 2008, Myspace was bumping. Everyone was on it and you wanted to be part of everyone’s top 8. Well, Myspace also had these quizzes. I never took them because it would be seriously boring for someone to read. I am very literal and my humor is more dry than witty. However, one of my long time San Diego buddies Hancy, would take these quizzes and the answers were so funny. I thought to myself, “where does he come up with this stuff?!” That same year, another buddy was hospitalized for a serious trauma and Hancy started a fundraiser to raise money for his hospital bills. I started thinking “hmmmm… Hancy has a heart!” and so it began. My love story with Hancy. 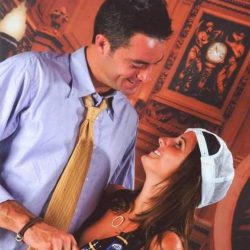 A couple months later another buddy asked my friend Andrea and I to go on a cruise to Cabo and we both immediately said yes, even though we had no clue who was going.  Well it ended up being only 6 of us and to my surprise for Hancy’s birthday!  Hancy and I spent the cruise together, eating pizza, ice cream and watching shooting stars (I kid you not). I was officially a goner!

I went home for Christmas and all I could talk about was Hancy. I even saw my ex and didn’t have one romantic feeling for him. SCORE!! How did I not see this kid that was right in front of my eyes this entire time?!?! I didn’t want to pressure him or freak him out by trying to put a label on whatever we were, but I was smitten.

WILL YOU GO OUT WITH ME? CHECK YES OR NO

We finally became “official” in January of 2009 and it wasn’t until months later that Hancy finally realized that I was “the one”.  In July of 2009, we went out for dinner and on our bike ride back I was hit by a car.  I literally had to break my jaw and elbow and be hospitalized for him to snap to reality. After the accident he would say, “well, at least now we know!”. My response was that “I didn’t need to smash my face on the pavement for me to realize that you were the one!” (Geesh! Men! Am I right ladies? LOL!) 10 years later we are stronger than ever and making memories to last a lifetime.

“When one door closes, another opens; but we often look so long and so regretfully upon the closed door that we do not see the one which has opened for us.” – Alexander Graham Bell

So you see, I was looking so hard at that closed door that I didn’t see what was right in front of my face for 5 years (our exact meeting date is a bit foggy).  However that being said I do believe timing is everything and we might not be as strong as we are today if we didn’t have all that time being single.

Moral of the Story: Open your eyes people. You might be missing something extraordinary right in front of your face! (and that goes for everything, not just relationships!)